Individual football technique training in a group of 1 coach - 4 players, matches with foreign coaches from the best European leagues, motor training, tactical training, mental training with a sport psychologist, Spanish language learning, skills tests, and for the best participants a free trip to Real Madrid and call-ups for the PSS Representation. The camps are intended for girls and boys aged 7-19, regardless of club affiliation and skill level. To date, over 30,000 girls and boys from around the world have taken part in the Polish Soccer Skills camps. Training with foreign coaches - our players will learn about the training philosophy of countries that have won the titles of the World Champions and European Champions in football.

Check out the availability of dates

NOMINATIONS FOR THE BEST Based on the Polish Soccer Skills Potentiometer we select players with the biggest football potential who will later be nominated to the PSS Representation!

Find out more about the Selection Team Winners of the Summer 2018 camps will go to Real Madrid as a prize! Additionally, they will receive call-ups for the PSS Representation and become the captains of their years!

Take a look at the previous trips of the Winners

All resorts are of a similar standard - the rooms have bathrooms with full sanitary facilities, and there is Internet access in the hotels.

We will train on full-size pitches, and in the event of a heavy rainfall, we will use sports halls; in every location we will use swimming pools and conference rooms.

Find out more about localities
Who, where, when?

The Polish Soccer Skills Summer 2018 camps will be organized for 9 weeks of holidays. Depending on the date, there are 8 camp locations to choose from.

Coaches from Spain who represent Primera Division clubs will train players on all camps, and in all locations of the Polish Soccer Skills Summer 2018 camps.

Additionally, there will be coaches from Germany, England, the Netherlands, Italy, France or Portugal at each camp!

This year, real Champions League will be hosted on the camps! Players will be trained and scouted by coaches who are associated with Primera Division, Bundesliga, Eredivisie, Premier League, Serie A, Ligue 1 and Primeira Liga clubs. An annual contract with Adidas!

If the Polish Soccer Skills Potentiometer shows that you are very talented, Adidas will provide you with professional equipment. Nominations to the PSS Representation

The best players, chosen based on skills tests conducted on the camps, receive nominations to the Polish Soccer Skills Representation. Those Representations are covered by a special special programme of care and promotion. For footballers, both male and female, gatherings and friendly matches with the best teams of Europe are organized. So far, Polish Soccer Skills Representatives have played with teams such as Bayern Munich, Atletico Madrid, Sevilla FC, Granada, Real Betis Sevilla, Cordoba, Wotford and others. Thanks to this, few of them were invited for tests to clubs of Bundesliga, Primera Division and Premier League. Just to name a few, our Representatives have undergone tests in Bayern Munich and Getafe.

For girls and boys of 7-19 years of age, for goalkeepers and outfield players

FRAMEWORK PROGRAM OF THE CAMP

Sports activities developed by Polish Soccer Skills have been consulted by a sports methodologist. The consultations concerned both the scope and intensity of classes in the context of children’s age and skills. Find out more about our training system

COACHES FROM THE BEST FOREIGN LEAGUES

Spanish coaches associated with PRIMERA DIVISION clubs are responsible for all matches at the Polish Soccer Skills summer camps. In addition, the second foreign coach, depending on the location, is a German coach from BUNDESLIGA, an English coach from PREMIER LEAGUE, a Dutch coach from EREDIVISIE, an Italian coach from SERIE A, a Portuguese coach from PRIMEIRA LIGA or a French coach from LIGUE 1.

Thanks to this, our players will learn about the training philosophy of countries that have won the titles of the World Champions and European Champions in football.

So far, our camps have been attended by coaches associated with such clubs as Real Madrid, Sevilla FC, Granada FC, Atletic Bilbao, Getafe CF, Valencia CF, FC Koln, Bayern Munich and many more.

WHAT STAFF DO WE PROVIDE?

All coaches, in addition to the Polish Soccer Skills license, have qualifications of football coaches, and the tutors have completed specialist educational courses. Get to know our staff

You can also win a free trip to REAL MADRID!

In total, 15 people will win the trip to Madrid. Every participant in the camp participates in skills tests and has a chance of winning! Participation in two camps means two chances to win!

NOMINATIONS TO THE PSS REPRESENTATION

Polish Soccer Skills Camps are available for all the players regardless of the skills level. However, the best players from the summer camps, in all the age categories, selected basing on the skills tests will be nominated to the PSS Representation for the season 2018/2019.

The Representatives are covered by a special care and promotion program. They go, among others, to special meetings and exhibition matches against the best foreign teams.

The representatives from previous seasons had the opportunity to show themselves to coaches and scouts playing, among others, against such teams as Atletico Madrid, Espanyol Barcelona, ​​Getafe, Sevilla, Watford, Juventus or Bayern Munich. FOR EVERYONE REGARDLESS OF THE SKILL LEVEL

All players can participate in the Polish Soccer Skills camps - girls and boys between the ages of 7 and 19, regardless of their skill level and position on the pitch.

On the first day of the camp skills tests are conducted, based on which four-person training groups are selected based on age and skill level. Therefore there is no situation that someone with good skills trains with someone who is just starting to play football.

In the Polish Soccer Skills camps in 2017 there were over 5,000 players from all over Poland - both from Ekstraklasa clubs and small school teams - and from 20 countries around the world.

The Polish Soccer Skills camp is a place where the entire football community is integrated, regardless of club affiliation.

Thinking about our players’ parents, we have educational materials prepared by a sports psychologist. Do you sometimes wonder how to support your child not to exert pressure, what to say after a lost match or how to encourage to training? In these educational materials we have answered those and other questions. We will suggest how to support a young player on his football path.

Apart from the uniforms you will get from us during the camp - rain jacket, polo shirt - you will additionally receive two new Adidas training sets with the Polish Soccer Skills logo. Players will train in their own new uniforms! The uniforms will be in the blue - navy blue and green - black colours. Additionally, we will print your name on the shirts :)

Note! The uniforms you have chosen in the registration form are ordered specifically for you, therefore they are not exchangeable or refundable. We kindly ask you to carefully choose the size of the uniforms. CAP AND BAG FOR SHOES

Now, in addition to the two Adidas training sets, you will get your own cap and a shoe bag with the Polish Soccer Skills logo! The football technique training sessions are always held in small groups of 4, so that the coach has the opportunity to pay attention to every detail and correct each mistake.

After a week you can see that bad football habits are eliminated and a better understanding of the purpose of a given exercise is learnt.

Due to an individual approach and high intensity of training, our camps can be compared to learning English in London - because everything that happens at the camp is related to football, the players feel a significant improvement in skills and self-confidence on the pitch.

After our training, the players become more aware and understand the purpose of the exercise. 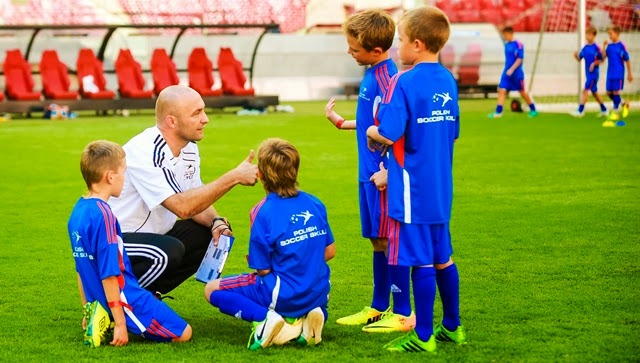 In addition to the graduation diploma, each player receives a specially prepared book with a description of an individual skill profile.

The assessment of skills and football traits is made by trainers and psychologists.

During a ceremonial end of the camp, the parents can also talk to the staff about their child. The price does not include transport to the camp.

Important! Promotion! When registering two or more camps for one participant, the price for one camp is PLN 1849.00. Localities of the summer camps 2018

Summer camps 2018 will be held only in sports establishments, which are prepared for football training camps. Participants are accommodated in rooms for 2-3 persons with a bathroom in high standard hotels.

The best players have the chance to go on camps abroad for free and it is possible for them to become the Polish Soccer Skills teams’ representatives.

The best players selected on the basis of the skills tests win free trips abroad to the best European clubs. Additionally, the players with the highest potential become the Polish Soccer Skills teams’ representatives.

Do you still have doubts? You’re not sure?